By Karen Watikins (September 7, 2017)
Sumptuous – ceramic bowls, careful carvings, charcoal etchings and quilted caps. Works of art on display at Nova Constantia, lovingly made by a relatively small core group of less than 10 members. Fibre Artists Cape Town, or FACT, mostly come from the southern suburbs but they have recently expanded to include members from Stellenbosch, Somerset West and Pringle Bay.
At their monthly meetings they crit each other’s work, plan projects and discuss art exhibitions.
On Friday September 1, they opened their latest Fact and Friends: Thin Red Line exhibition at Nova Constantia. As a group, they have exhibited previously there, in 2014, when they combined with a group of painters. “For this exhibition we decided to broaden the scope by including, ceramic artists, jewellers, embroiderers and a basket maker, making up 37 participating artists,” said member Sheila Walwyn.
“To bring some cohesion to the exhibition we set a broad theme of ‘Thin Red Line’. Some have chosen to interpret this in a more metaphorical than physical way, some have just incorporated a few red stitches in their work, others have used a strong visual red line, it could be the fine line we sometimes walk, a connecting line between things, it could represent blood or fire, or a heart’s arteries,” said Ms Walwyn.
The show was juried by two art teachers. “More because we were concerned about the space constraints of the venue, than because of a need to vet the work in any other way. And as it happened, we were able to accommodate all the work submitted,” she said.
Guest speaker was Elbé Coetsee, owner of Mogalakwena Craft Art Development Foundation and author of ‘Craft Art in South Africa’.
Describing fibre art, Ms Walwyn said it is fine art work where the artist would use some kind of fibre which could incorporate any kind of material. Mostly cottons, but also upholstery fabrics, organzas, velvets, chiffons could be used. The work would also include the use of thread in a decorative way, as in quilting and embroidery.
“We sometimes meet on another occasion in the month to attend local art exhibitions or events. Some of our members have art backgrounds, others have come into fibre art via the more traditional patchwork and quilting,” said Ms Walwyn.
The venue is home to Rick and Margie Garrett, who donated the venue and any profits made from entry fees, door fees and sales, once costs have been covered, will be donated to the Homechoice Development Trust.
As a group they are not involved in upliftment projects, although several of them, who are also members of quilt guilds, have been involved in teaching and donating supplies to outreach groups.
The exhibition runs at Nova Constantia until Saturday September 9, from 10am to 6pm, in Nova Constantia Road. Entry is R20, which includes tea/coffee and biscuits, with proceeds being donated to charity.
Posted by Diana at 17:23 2 comments: 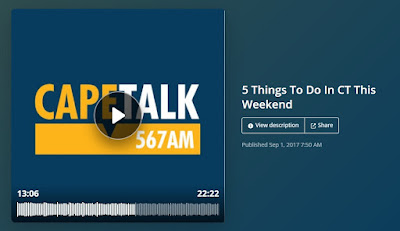 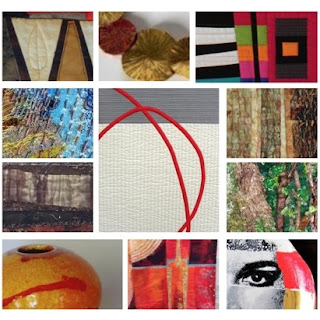 SABC: An art exhibition with a difference is on display at the Stellenbosch University Museum.
Ubuntu, Life Legacies of Love and Action -  is a collection of 30 quilts.
It pays tribute to Archbishop Desmond Tutu and his wife Leah's lifelong commitment to human dignity.
The handmade quilts are reflections on the Arch and his wife.
It was initiated by the Michigan State University Museum and the Desmond and Leah Tutu Legacy Foundation.
Textile artists from South Africa and North America spent two years creating the pieces.
It depicts the Tutus as an unbreakable unit but also shows the sorrow of the horrors they fought.